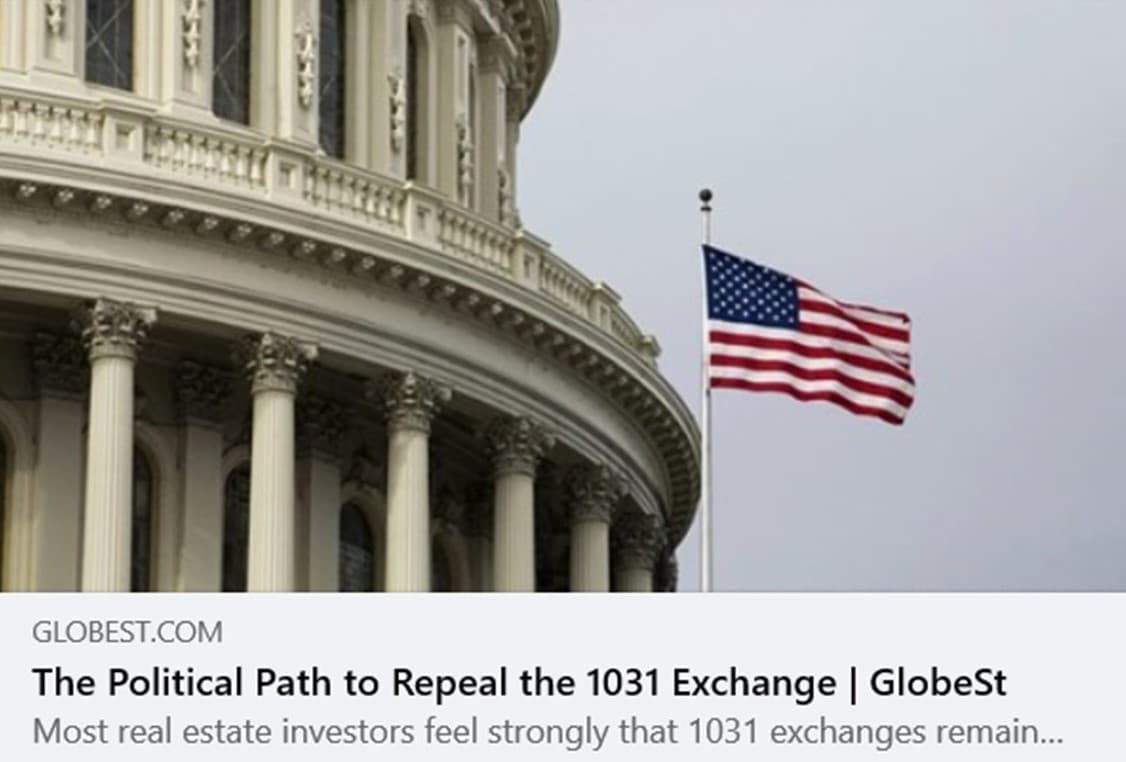 Most real estate investors feel strongly that 1031 exchanges remain a target for repeal or limitation.

President Joe Biden’s election has renewed the discussion as to whether 1031 tax deferred exchanges are once again in danger of being repealed or modified to limit its tax benefits.

Most supporters of 1031 exchanges expound on its benefit to the broader economy, as well as studies which show that 1031 exchanges are “revenue positive” to Federal and state treasuries. While those arguments are valid, they are based on logic and reason in what is now a very political discussion.

Although there does not seem to be any record of Joe Biden specifically discussing 1031 exchanges, a senior campaign official for then candidate Biden, is quoted in a July 21, 2020 Bloomberg article explaining the plan to limit the use of 1031 exchanges for real estate investors with incomes over $400,000: “…. a Biden administration would take aim at so-called like-kind exchanges, which allow investors to defer paying taxes on the sale of real estate if the capital gains are reinvested in another property.”

Historically, the political party of the President loses seats during midterm elections in both the House and Senate. With a small Democratic majority in the House, and Vice President Kamala Harris needed to cast tie-breaking votes for the evenly matched Senate, there is a chance that the Biden administration will need bipartisan support should they lose even a single seat in the Senate in the mid-term election. Accordingly, there is a greater risk for 1031 exchanges to be repealed or limited between now and November 8, 2022 as Democrats may focus on it given their current control of Congress.

The Cook Political Report has identified six Senate races in 2022 where the seat could go to either party. Of these six races, projections show that two lean Democrat, two lean Republican, and two are a toss-up. With control of the Senate on the line, both political parties will undoubtedly pour a huge amount of resources into these races in much the same way they did in the recent Georgia senate races.

Having a simple majority in the Senate is especially important when trying to change the tax code. While most bills require a 60-vote supermajority to defeat a filibuster, the use of a parliamentary rule called “reconciliation” allows laws to be passed with a simple majority. Reconciliation can only be used once per year for each category of spending, revenue, and federal debt limit. One of six restrictions contained in the Byrd Rule, which outlines items which are ineligible to be included in a reconciliation bill, requires that a law passed using reconciliation to sunset if it increases the federal deficit beyond a ten-year budget window. While this takes the pressure off the need to find new tax revenue to counter an increase in spending, most lawmakers prefer to reach for a revenue neutral law, if it can be accomplished. Repealing 1031 exchanges would potentially provide, at least in theory, just such an offset.

Fiscally conservative Democratic Senator Joe Manchin of West Virginia, as well as fiscally moderate Democratic Senators Kyrsten Sinema of Arizona, and John Testor of Montana, all acting as potential swing vote, may all wield outsized power as tax reform is discussed. In a break with their party, Senators Manchin and Sinema indicated that they would vote against the proposed inclusion of a $15 federal minimum wage in the Covid-19 aid package. Senator Manchin had indicated that he would be open to a lesser amount before the Senate Parliamentarian ruled that this measure could not be included because it violated the Byrd Rule. These same Senators are also from traditionally Republican leaning states and may seek more of a moderate position in any proposed laws affecting the tax code or monetary policy.

When Donald Trump was elected president in 2016, he was in much the same situation as President Biden is in now with his party in control of Congress. The Trump Administration was able to push through many pieces of legislation, including the passage of The Tax Cuts and Jobs Act of 2017, which made some major changes to the tax code. However, even with Republican control of Congress, the Trump Administration failed to repeal the Affordable Care Act, which was one of Trump’s most fervent campaign promises, because Senator John McCain of Arizona refused to support its repeal.

In another similarity between the two incoming administrations, Senator Manchin was described in a February 7, 2010 Politico article as “The Democratic Version of John McCain.” He is from a state which twice overwhelmingly voted for Donald Trump and where the other US Senator is a Republican. He is the rare Democratic senator in a deep “red state”. Will Senator Manchin play the break with his party as did Senator McCain should the Biden Administration look to make changes to the tax code? It remains to be seen.

Additionally, a repeal of, or restriction on, 1031 exchanges is not the only major tax reform proposal in the quest for additional tax revenue. Some of the Biden Administration’s tax positions include raising the marginal income tax rate back to 39.6%, increasing long term capital gains tax rate to 43.4% (39.6% plus NIIT 3.8%) for taxpayers earning over $1 million, reducing itemized deductions for taxpayer with an income tax rate higher than 28%, and eliminating the step-up in basis for assets passed to heirs in estate proceedings. Many of these provisions, especially the increase in capital gains tax rate and the elimination of a step-up in basis, could have severe negative effects on the real estate market.

While it is difficult to understand the political arguments for or against 1031 exchanges, the economic arguments in favor of retaining 1031 exchanges are many. A 2015 study conducted by Ernst & Young on behalf of the Federation of Exchange Accommodators found that the repeal of the 1031 exchange would shrink the US economy by $13.1B, result in less federal tax revenue, and discourage new investments. Contrary to the popular belief that 1031 exchanges provide an indefinite tax deferral, a study done in 2015 by Professors David Ling and Milena Petrova (updated 2020) found that 88% of properties acquired through a 1031 exchange are eventually sold in a taxable sale. A repeal of 1031 exchanges would severely curtail the velocity of the real estate market and negatively impact many resulting tax revenues such as transfer tax, mortgage tax, recording fees and income tax revenue from real estate professionals such as brokers, attorneys, CPAs, lenders, and title insurance companies.

In conclusion, it remains to be seen whether the Biden administration will focus on tax reform, or first try to tackle other hot button issues such as immigration reform, climate change, minimum wage, criminal justice reforms, fixing the Affordable Care Act, as well as grappling with all the ongoing Covid-19 related issues. The Biden administration must also consider that at a time when the US Treasury is injecting trillions of dollars into the economy to prop it up, the repeal of 1031 exchanges could also prove counterproductive to economic growth.

Legal 1031 does not provide tax or legal advice, nor can we make any representations or warranties regarding the tax consequences of any transaction. Taxpayers must consult their tax and/or legal advisors for this information. Unless otherwise expressly indicated, any perceived federal tax advice contained in this article/communication, including attachments and enclosures, is not intended or written to be used, and may not be used, for the purpose of (i) avoiding tax-related penalties under the Internal Revenue Code or (ii) promoting, marketing or recommending to another party any tax-related matters addressed herein.

A 1031 Exchange is not a “tax loophole” or a “tax dodge.” It is a tax benefit that helps fuel the economy.